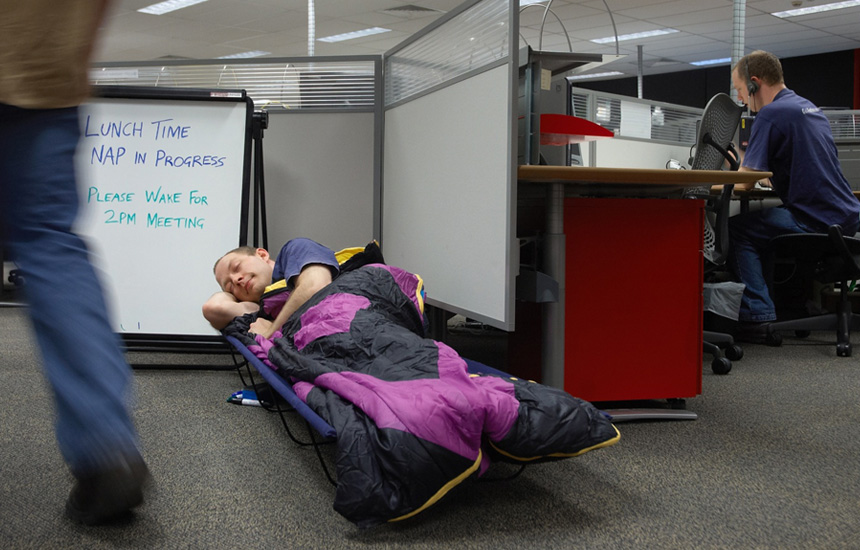 This is an afterthought from my last post, Thinking out loud: The OPEN plan.  It’s about resting during work, which gets harder once you’ve moved into open plan.

In the OPEN plan post there’s a section about exposure overload in which I mentioned comments from open plan workers in the 1960s. This was based on a study initiated by Herman Miller who had Professor Robert Propst ask office workers questions about their open-plan experience. One question these workers were asked was: “can you take a nap in your office without embarrassment?” (BBC #23502251).  I loved the wording of the question, as if it should be expected.

Do we get enough of the right kind of rest?  Uninterrupted, battery-charging rest?  I’m not talking fatigue, where you find your workmate face-down, kissing the keyboard, sending out a string of Zzzzs.  We hear rest during the day is good for us yet you wouldn’t think of doing it at work, would you?

Check out how George fares in this Seinfeld episode. ‘The Sleeping Desk’. He takes the concept of sleeping at work to an admirable level.

I’ve often wondered why there are no rest rooms (not loos) around the campus.  There are sick rooms but I don’t like the idea of rest being synonymous with sickness.  And I don’t necessarily want to lie down, just someplace comfortable and quiet made for resting, not eating or studying.  A place where those of us who are introvert can go to charge our batteries and extroverts can go to wind theirs back a notch.

Napping at work isn’t an accepted concept. Do you want to be thought a sloth by your boss and workmates? Chances are, they may be wanting to catch a few winks, too, considering studies that present the value of napping at work.

And here’s the recipe.  This is a great thing to make and take to pot luckies.

Measure lukewarm water (when you stick your finger in the water it will feel good and warm, not hot). Pour sugar and yeast onto the water (don’t need to stir), let stand for about 10 minutes until foamy. I put this in a lightly warmed oven with a tray of water at the bottom to moisten the oven. I leave the water tray in during baking.
While waiting, combine the flour and salt in a large bowl. Add the olive oil and work it in with your fingers. When the yeast mixture is frothy, make a well in the centre of the flour, add the yeast mixture, and stir to form a soft dough.
Turn the dough out onto a lightly floured surface and knead for about 10 minutes until smooth and elastic. Form into a ball, put in a lightly oiled bowl. Cover the bowl with a damp cloth, waxed paper or plastic wrap and leave it to rise in the lightly warm oven for about 1 hour until it doubles in size.
After that time, it’s time to shape. I differ from the original recipe quite a lot here. I cut the dough into 2 pieces, the original recipe asks for 12 pieces to make smaller rounds. I’m make pizza base. Roll out the dough to about 1/4- inch thick. I put mine on two large-sized pizza pans. Pinch around to form higher edges. You can use a fork to pierce the dough all over, releasing air pockets if you like, I don’t.
Preheat the oven to 220 degrees C. Put the baking tray in the oven to heat.
I leave this on the bench top to prove while I’m making the topping and preheating the oven.

Warm 1/2 cup extra-virgin olive oil over the stove. Spices this: I most always use cumin seeds and garlic, often add turmeric and cinnamon to get a Moroccan flavour. Sometimes I chuck in some fresh rosemary. I rub this onto the pizza then pile bits of fresh tomato, black olives, thinly sliced pepper (red or green or both) and whatever else you can think of that blends with this. I don’t always use cheese but when I do it’s fresh grated parmesan but I bet feta would be good.
I bake this up to 30 minutes but check around 20. You may want to move it around in the oven.