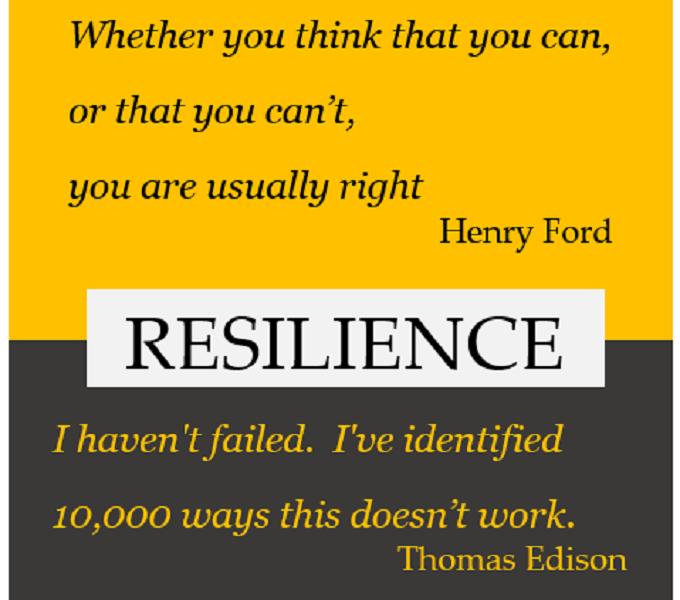 in the writing course recently we considered how resilient we are.  Resilience would be vital for the next stage of writing – finding a publisher (cross fingers) and the editing process that comes of publishing which they say is much worse than the actual creation and writing of a novel.

We were introduced to the seven resiliencies with this mandala: 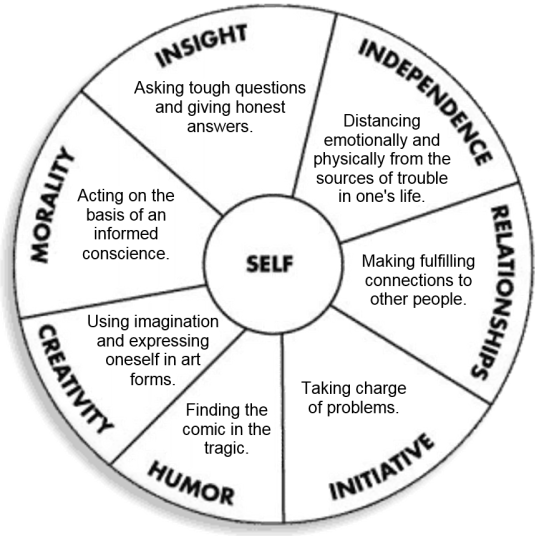 We wrote an example for as many of these resiliencies as we could think of, then shared what we thought was our strongest slice.

My example was humour – I told a long story of a car accident I was in when I was a VSA volunteer in Vanuatu.  Here’s that story:

I was driving into town from Mele Beach on a Monday morning after a sleepless night.  A sleepless week, in fact—volunteering in a tropical country, living right next to a sand beach with sunshine and blue skies about 90% of the time proved stressful.  My partner and I were swollen red and at the  bursting end of a problem pimple of fighting.  I had the car, he had a truck from work and would follow at some later point.  It was about 6am.

The main roads (Note:  this is the long version of the story) in Vu are cratered and this forces the speed down.  This is a country where there is no stop sign (or wasn’t when we were there between the late 90s and early 00s), nor is there a speed limit. The pavement craters achieve a limit of sorts.

Coming up over the hill on the town side of Bon Marche, I saw a bus (van) go into a U-turn across my lane.  The driver would have made it had he not had 2-day kava the night before.  2-day causes you to want nothing but sleep.  But I didn’t know that then.  I proceeded knowing the U-turn could be completed in time.  But the van came to a stop right in front of me, broadside on in my lane.  The other lane had traffic.  I pumped the brake and braced, it was too late to avoid a hit.

Most cars in Vanuatu aren’t fitted with seat belts.  Ours was a volunteer’s car, a pretty good one, but no belts. Therefore I couldn’t help but try to break the wind screen with my head.  Laminated, the glass folded out in the shape of my head like a electronic wire frame drawing of the shape of my head.  I was shocked and bleeding, but conscious.

(Remember, this is about humour)

In Vanuatu, my experience was that some Ni-Vanuatu react negatively to this sort of stress.  One story that influenced my emotional reaction was an incident where a young foreign man was driving down the road – he had been drinking – and he hit a Ni-Van with his car.  The brother of the hit man reacted with the strong reaction I mentioned and when the foreigner got out of his car to check to see if the hit man was all right, beat him over the head with a piece of steel-re-enforced concrete.  The young foreign man was dead after several strikes of the concrete.  This memory was likely a motivating factor to me to get the hell out of this car.  My hands were stuck to the steering wheel which I had grabbed on to before I hit.

My door was flung open and hands came to help me loosen me from my grip.  It was a friend who was travelling a few cars behind me ̶ relief.

Meanwhile, my partner was heading to town in the truck.  There is only one way into town.  The accident had blocked traffic from the turn off of the beach to the town roads, cars were backed up to Bon Marche.  He inched his way forward, figuring there had been an accident.  A few cars away and he could see his car there.  As he got closer he yelled out to an onlooker ‘Eh, woman ia?  Wea? ‘  (Where is the driver?)  The answer was ‘Go finis‘, a phrase which can be taken as ‘gone already’ or ‘gone for good’, but it does mean gone.

Imagine yourself in this position.

Long story short (too late), the friend drove me to the hospital, his wife stayed with me though she wanted to faint at the sight of blood (I found out later), and the friend drove back to see if he could spot my partner.   He drove up to the accident site as my partner was reacting to the ‘Go finis’ news.  It was chaos at the scene, they were both in their moving  vehicles, the friend yelled in passing that I was at the hospital.

(we’re getting there …)  I had a mild concussion on first diagnosis, there was the possibility of a skull fracture,  but they didn’t have the equipment to test so I had to be sent to NZ.  Since it was a head injury, my partner had to accompany me.  We had, luckily, very good insurance through VSA.

I was in NZ for a month.

We had lived in Vanuatu for over a year, this was the first time away since we had started̶—we couldn’t afford to travel.  My volunteer assignment wasn’t working, my partner’s was.  It was tense for many reasons and I feared going back.  I was very unhappy with 90% sunshine and a sand beach bungalow.  And accidents that cause head damage aren’t helpful to the psyche.  I feared returning but, over the time in NZ, decided I must.  I’m not a quitter.

Well, the point of this is humour.  Why?

Once I made the decision to return to Vanuatu, I made a mental shift to a) change what I was doing and b) sever myself from some toxic  relationships I had there.

When the plane touched down on the melting tarmac the evening of our return, I stepped off into the frying pan heat and got a lungful of organic air, felt the sweat start to moisten my face and I had a totally positive reaction.  I missed some things about this, the nature, the organic-ness of the tropics.  You feel younger in the hot climate, it has a relaxing quality.  I was still afraid of what I had to face, the people I had to sever from and what might happen between my partner and me.  But there was something here that I had attached to.

Mosquito was VSA’s newsletter sent to all volunteers and friends of VSA; it is made up of volunteer stories and contributions.  For the next issue I created a this drawing: 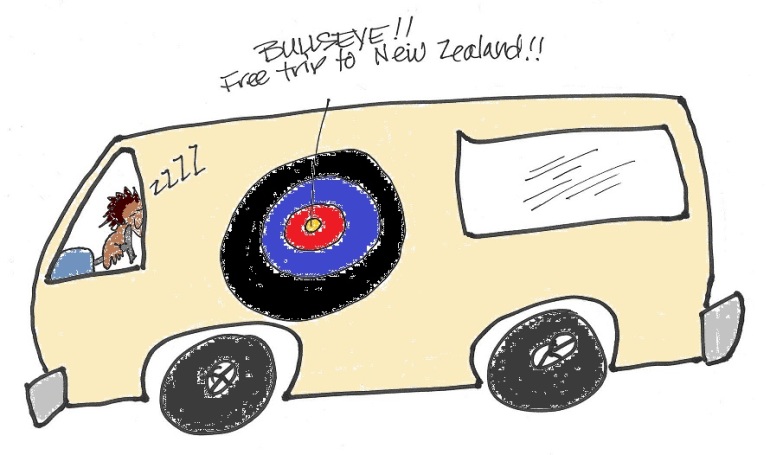 Always look on the bright side of life might be going a bit far, but having a sense of humour can lighten dark experiences.

Resilience is all over the web.  Explore to learn.  Here are several examples of things I found:

Phases of resilience Child, Adolescent and Adult phases of Resilience)

The value of Self reflection – James Schmidt (TED) relays a personal experience and lessons he got from it.

Resilience vocab (with mandala) – this talks more about the first mandala that you can use to find examples of your own resilience.

1. Emotion regulation – the ability to manage our internal world in order to stay effective under pressure. Resilient people use a well developed set of skills that help them to control their emotions, attention and behaviour.
2. Impulse control – the ability to manage the behavioural expression of thoughts emotional impulses, including the ability to delay gratification explored in Daniel Goleman’s work in Emotional Intelligence.  Impulse Control is correlated with Emotion Regulation.
3. Causal analysis – the ability to accurately identify the causes of adversity. Resilient people are able to get outside their habitual thinking styles to identify more possible causes and thus more potential solutions.
4. Self-efficacy – the sense that we are effective in the world – the belief that we can solve problems and succeed. Resilient people believe in themselves and as a result, build others’ confidence in them – placing them in line for more success and more opportunity.
5. Realistic optimism – the ability to stay positive about the future yet be realistic in our planning for it. It is linked to self-esteem but a more causal relationship exists with self-efficacy and involves accuracy and realism – not Pollyanna-style optimism.
6. Empathy – the ability to read other’s behavioural cues to understand their psychological and emotional states and thus build better relationships. Resilient people are able to read others nonverbal cues to help build deeper relationships with others, and tend to be more in tune with their own emotional states.
7. Reaching out – the ability to enhance the positive aspects of life and take on new challenge and opportunity. Reaching out behaviours are hampered by embarrassment, perfectionism and self-handicapping.

Any opinions expressed here, except as specifically noted, are those of the individual authors or commenters and do not necessarily represent the views or policies of Victoria University.
Loading Comments...
%d bloggers like this: