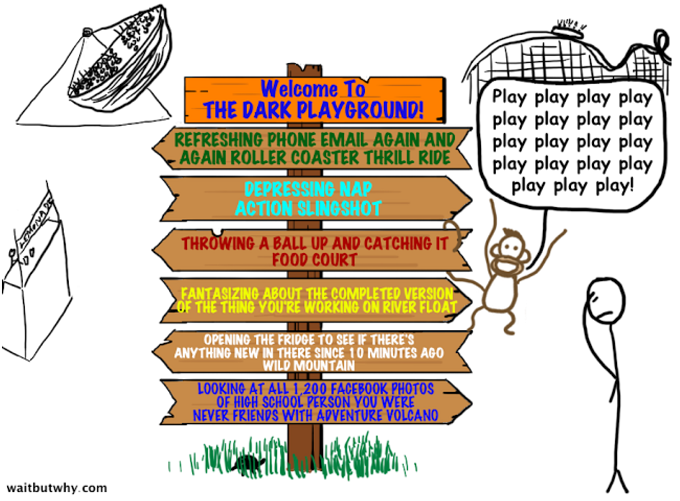 Smudge on the fridge door

At this time of year – the threshold of study/exam time – the fallout from the topic of this blog becomes apparent.  Your rational-decision maker has been dominated by the much more fun instant gratification monkey and now your dreaded panic monster is unleashed. It’s times like this that the smudge on the fridge door becomes your over-riding concern.

Remember Bertrand from the marshmallow engineering office in last month’s blog?  ‘Bertrand displays down times of flagging energy, which happen twice of a morning and three times of an afternoon.’  Remember?  Well, yes, we’re onto him in this episode.

This blog will eventually be about procrastination, but right now Bertrand is determined  to clean the fridge smudge of the title.  It’s been bothering him since … oh I don’t know how long but now it’s become obsessively annoying.

No matter that it’s been there for weeks.  Or maybe years.  But now that he’s noticed it, it has to go.

Was he standing in front of the fridge staring, is that why he noticed it?

Oh, yeah, I got it – it was left by a the moose magnet which for some reason Bertrand had moved just last week, moved a millimeter because it wasn’t in the right place. (conversational procrastination)

The smudge is nearly gone now, but, geez, it’s taken Jif and a steel brush to clean it.

Bertrand has made an art form of dithering.

His philosophy of those aforementioned desk-side chats are …

now that he’s cleaned that smudge, the rest of the door looks post-apocalyptic.

Shouldn’t have looked at it!

Ah, but.  He simply can’t continue until he does something about that. (attentional procrastination)

Procrastination is about the only thing you don’t have to learn by doing because it seems inbuilt into our genetic code.   Is It Not Rational To Procrastinate?

I think procrastination is our body’s way of telling us that our brain wants us to leave it alone, to stop nagging and just meander.  Our minds like to meander – this often leads to our best Ahas!.  It’s also much less stressful.

Oh dear, the fridge door is scratched now.  Ugh.  I can’t stop looking at it.

I repeat, is it not rational to procrastinate?

Procrastination is used by everyone.  Here at Victoria staff and students do it, academics and professional staff, campus care and the food service people, the wellness team, the cleaning staff, the parking warden, your supervisor.  The only ones who don’t do it are the mannequins in shop windows.  Procrastination seems to be designed for them, eh.  Luckily we don’t have shop windows with mannequins in them here at Vic or we may take this as model behaviour.

Ah, there’s a smudge on the glass, too.  I’ll get that. (multi-tasking procrastination)

Bertrand’s philosophy of procrastination is that it’s not really a bad thing – how else do you get your kitchen cleaned?  He remembers first becoming aware of this phenomena – smudge revelation he termed it -when he was writing his research paper on Marshmallow crème as an instrument of mass construction.  Recently tidying up the papers he had collected during that time he placed them in piles of those read and those unread.  Which pile do you think was the tallest?

Why do you suppose?  Was he just not interested in knowing all there was about marshmallow crème as building material?

More recently, while writing a business report on the structural integrity of marshmallows – something whose process and completed draft was actually life-affirming – Bertrand still snuffed around a bunch.  There were mind numbing games of solitaire with the playing cards he got in Florence, the one with a picture of the statue of Baccus on a turtle.

Ah, those cards are wonder – where are they now? (the wandering viewpoint procrastination)

Ah, yes, and cleaning the bathroom tiles with a toothbrush – something he’d considered doing since he moved into this flat three years ago.  All it took was a think piece on marshmallow crème vs. marshmallow fluff to get that toothbrush out.

Well then, why don’t we use reverse psychology here?  How can we tap into the effectiveness, the genius (shall we call it) of procrastination?

Here’s Tim’s fun video (social media procrastination).  Consider why we choose the easy and fun over what makes sense – the big picture.  Learn about worst kind of procrastinating – the dream killer.

Now he’s eyeing up the stove door.  (The marshmallow as flotation device blog he’s working on has yet to be posted.)

Is there a moral to this story?

(I certainly hope so.)

(There is no moral, is there?)

Watch the video.  You can worry about morals later.

Should you be studying right now?  🙄